How Long Should You Boil

Ever wondered how long should you boil certain foods? Well...here are the answers! When food is boiled it cooks but somtimes we make the mistake and don't boil it long enough. Or...we boil it for too long and it turns out soggy!

Raw food needs to be cooked for a certain amount of time and at a certain temperature to make it safe to eat.

Bacteria needs to be killed to prevent food poisoning. By boiling food it not only cooks it but kills any bacteria.

Many people think you need to boil water for at least 10 minutes before its safe to drink.

Water needs to be at 70 degrees for 30 minutes to kill all bacteria.

Water at 85 degrees kills all bacteria within a few minutes. So by the time water reaches boiling point (100 degrees) all bacteria is killed and is safe to use.

When boiling eggs, always put them in boiling water.

Never place eggs in cool water and bring to a boil.

A useful tip, pour vinegar in the water to prevent the eggs from cracking. The vinegar holds the shells together.

The boiling times mentioned here are to fully cook chicken.

When pre-cooking your chicken, the boiling times are a lot less as you are just pre-cooking!

Chicken breasts need to be boiled for an hour before they get tender. Boneless breasts will take 45 minutes to be fully cooked.

A whole chicken needs to be boiled for 2 - 3 hours to be cooked properly. (depending on the size!)

Corn on the Cob

Larger sized corn ears need to be boiled for 12 - 15 minutes.

Corn off the cob cooks a lot quicker, boil for 4 - 5 minutes to get them soft enough to eat. When boiling corn add a pinch of salt to flavour.

Keep up to date with new pages on Bonfeu-BBQ, Subscribe through our RSS buttons above. 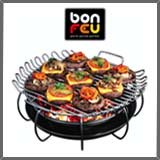 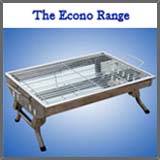